Dear friends,  I got this email with some nursery questions and I wanted to address them:

“The songs are very short and by the time I get the instruments or whatever passed out, it seems like I should be using them for at least a little bit before we pick them up again. I want to shift gears frequently enough to keep their attention, but they don’t even get started until at least the second or third time through.

How much can I change the activity that I do with a song? Should I use the same activity to teach the song for a few weeks so it is familiar for the kids or should I be switching from week to week to address the different learning styles?”

I have talked about The Back Door before, but this is an excellent chance to speak of it again.  When we get a child engaged and participating, it doesn’t matter at first if they sing the songs.  The melody of the song, the flow and beat of the song, and the words of the song will slip in the back door of their brain IF they are actively engaged in some part of the song.  Sing the song a couple of times using the instruments or manipulatives or hand actions, then switch to a different song. Don’t worry if they never sing. 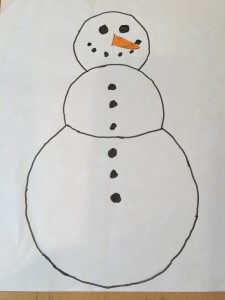 I plan on 5 to 6 different songs for the Nursery age child, some of them lively and rhythmic, and some of them gentle and sacred. They need songs that are about concrete things: seeable, touchable, smellable.

When I sing the song “If You’re Happy and You Know It,” the concrete actions of clapping hands, stomping feet, and blinking eyes are appealing to the children.  In addition, the children at this age NEED lots of movement so it is a double plus.

When I sing the song “Family Prayer,” the actions on page 52 of the Nursery manual are great, but the song is even stronger if I have paper bag puppets of family members to pass out in addition so that the children can hold something and “act out” some of the actions (i.e. gather in a circle, kneel, pray) as we sing.  The family member pictures on page 59 can be enlarged, cut apart to individual family members, and pasted onto a paper lunch bag to make different puppets. 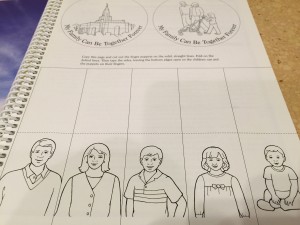 By using both the actions and a manipulative, I get to sing the song with children several times in one setting, and the children get seeable, doable interaction with the song.

I’ll give some more ideas in my next Nursery post.