If you clapped the beat to the first verse of Praise to the Man, you would clap on the following syllables.

The steady beat of this song is ALMOST on every word, but not quite. (That’s what makes this next activity more fun<grin>!)

Clap the rhythm as you sing

Tell the children you are going to clap out the words to this song.  Ask them to clap with you.

(Sing and clap the words – which is the rhythm – to this song.)

At the end of the first phrase, call out “Freeze!”  Challenge the children to be really precise about the next line.  Some of the notes are LONGER than the rest of the notes.

(Sing and clap the words to the 2nd line, “Jesus anointed that prophet and seer.”)

At the end of the second phrase, call out “Freeze!”  Whisper to the children that you have a secret! Even though the words are different, your clapping will be the same as the first line!  Clap and sing to find out what it sounds like.

(Sing and clap the words to the 3rd line, “Blessed to open the last dispensation.”

Instead of calling out Freeze at the end of this line, go right into singing and clapping the fourth line. (The unexpectedness of not freezing at the end of the line wakes some of the children up!<Grin>)

At the end of the fourth line call out “Freeze!”  Ask the children to move their clap from their hands to clapping one hand on an elbow.

(Sing and clap the words to the chorus on your elbow.  You can switch to a different elbow in the middle.)

When you get to the words, “Mingling with Gods,” go back to clapping with your hands (to keep the children’s interest). 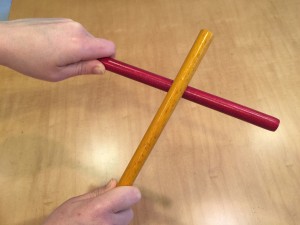 Begin singing the song (no clapping) and after a few words, give the signal.  Clap the words instead.

In another little while, give the signal and sing the words instead. Continue in this way throughout the whole song back and forth between singing and clapping once the signal is given.

When you have finished singing/clapping the whole song, choose a bishopric member, a birthday child, or someone else to give the signals to the group while you all sing and clap once again, seeing if you can follow their signals.

I made a quick video of Clap Instead. You can watch it here – https://www.youtube.com/watch?v=T0-TX6rCJjE