Acting something out with your body is a powerful learning tool.  For children, role play is a kinesthetic kind of learning that is strong for them.

I use role play as a great activity to teach the children the verse about Adam the prophet. Each child has a prop to help them “be” the part. (Your children will look much better than my stick figures!) (Note: this is basically what the drawings are for the activity Draw the Song.)

I put Adam in a robe, then he kneels on a small platform (like that which we use on the floor at the podium for shorter children).

“Adam was a prophet, first one that we know” 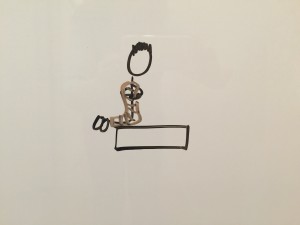 I ask to children to be the trees in Eden and stand on either side of Adam.  You can use actual tree limbs if you live around an evergreen, or you can draw a tree for each to hold.

“In a place called Eden, he helped things to grow” 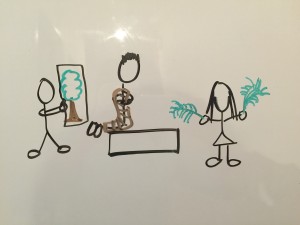 I ask another child to be one of the angels that teaches Adam about the gospel. He wears something white. (I tell the story of the angel of the Lord coming to teach Adam as in Moses chapter 4.) He stands in front of Adam. 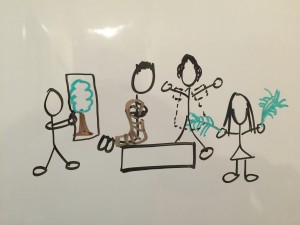 “Adam served the Lord by following His ways”

I ask three other children to be Adam’s descendants. Each one wears or hold something from a different country.  They kneel in front of Adam looking out at us.

“We are his descendants in the latter days.” 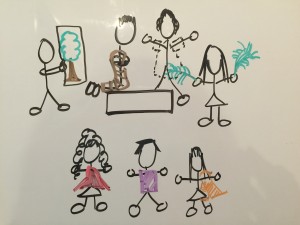 At this point, I ask each child to go give their prop to someone else in the group to allow them to be the role. For the older children, however, as they are switching “actors,” I ask them to do this extender activity:

If your younger Primary has a lot of 6 and 7 year olds, you could also consider doing this extender activity.  The children love the challenge.  What they don’t know is that their brain is singing the song inside (called audiation) so that they can know when to come in with the word (or leave it out). It is a very strong way for the brain to learn a song!