“Look what I have,” you tell the children.  Begin singing.  “Picture a stable in Judea.”  Hold up the stable and set it down on a small table beside you.  “Picture a sacred, silent night.” Take a piece of dark fabric or a piece of black paper and prop it up behind the stable.  “And can you hear the angels near…” Set the angel up above the stable.  “And see the star so bright?” Set the star above the stable.  “Picture the little baby Jesus.  Think of his life and words so dear.”  Set the baby Jesus in the scene.  “Sing praise to him; Remember him, As you picture Christmas this year.” 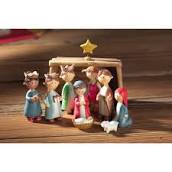 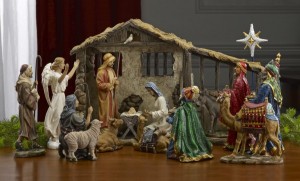 “I have more Nativity sets that I would like to set up.  I have given a bag to these classes and while I sing, they are going to set them up.  Wait until I sing about just that piece to put it up!”  Begin to sing. Each group of children (with a teacher’s help) will set up the Nativity scene while you sing. 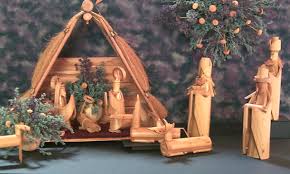 Hint:  No child likes to be left out of touching something new like this. They are naturally curious.  If you have a large Primary, I would either get enough Nativity sets for each class, or I would then take down the scenes just used and give them to the other classes who need a turn while you sing the song again.

What the children don’t know is: while you are concentrating their focus on the pieces of the Nativity set(s), they are hearing the melody of the song, the word sequence of the song, the rhythm of the song, and even the harmony of the song over and over again.  The song is coming in the back door of their memory.

“And can you hear the angels near…”  Again tell the children you need to change your magic crayon to be angel colors. “Poof!”  Draw the angels, asking the children to draw with you.  Tell them to make sure they draw the hair and the eyes and the mouth.

Continue on singing the rest of the song, and stopping to change the magic crayon so that you can draw that part of the song.

When you have finished the song, tell the children that you want to put sparkly touches over the whole picture you have drawn with your magic crayon.  Change all of your crayons to magic sparkles.  “Poof!”  Sing the song again without stopping, but redraw each object as it comes in the song in exaggerated movements to add the “sparkles.”