Ideas for Older Children to learn The Shepherd’s Carol 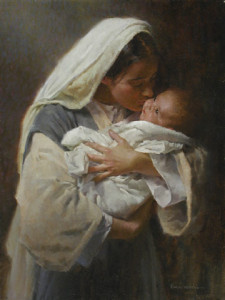 Idea #1 – Actions in the round

Now ask one of the teachers and an older child to lead the first group with the actions and words to the song.  Join them in singing and doing the actions in a round by coming in after the first phrase.

Now challenge the children to make NO sound, but only do the actions in a round! (You will see intense concentration in their eyes.)

Idea #2 – Windwands in the round

Stand in front of the children and say, “Here is the pattern.  Watch and tell me what it is.”  Sing the song and do the pattern with the wind wand.  “Use your words to tell me the pattern,” you ask, and receive their answers. 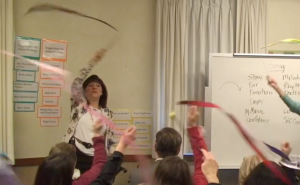 (Here is the pattern I did.  You could adapt it to fit you.)

Ask them to use a pretend wind wand and do the pattern with you as you sing.  When you finish the song, have two or three adults help you pass out the wind wands as you ask if there are three children who think they know the pattern well enough to come up and help you.  Choose the children, have them come up front, and do the pattern all together while you sing the song again.  (This can all be done as the windwands are being distributed.)

Now ask all the children to follow the three children helpers while you do something else.  Challenge them not to get pulled off<grin> from following the three leader children by what you are doing.  After the children start the song doing the pattern and singing, you come in and do the song in a round, you being the round for the children who started first.

Divide the room in half.  Ask for three more children who think they could lead the wind wand pattern (in addition to the three you already have).  Ask half of the children to follow one group of leaders, and the other half of the room to follow the other group of children leaders as you do the pattern and sing the song in a round.

The children love the wind wands.  (Don’t forget to set safety boundaries in two very short statements before you start.)