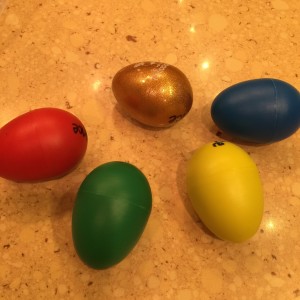 Egg Shakers and Childen… now that’s a delightful combination!  And younger children love the egg shakers.  How do you use them for a gentle hymn like Come Follow Me?

Can your hands follow my hands?  Put your hand up, then down, then behind your back, then up again to get the children moving with you.  Then go into the tap and shake pattern below as you sing.

Would you like to hold an egg shaker as we sing the song again?  Pass out the egg shakers to each child.  (If you don’t have enough, give them to half of the room.  Sing the song again and have them give their egg to someone who hasn’t yet had a turn with the egg.)

Repeat the actions as you sing the song with the children following you, tapping and shaking their eggs.

What the children don’t know is that they are experiencing the gentle beat of this song in a hands on way.  They are focused on following you with different locations for the egg shakers.  Meanwhile, the words of the song are gently making their way into the backdoor of the children’s minds.  The gentleness of the shaking which you model gives the children a physical way to experience the mood of the song.  And…. the children like using the eggs!