I listed one or two words from this phrase of the song.  I continue to list one of two of the words from each of the phrases of the song, and type up the list in 42 font onto one page. 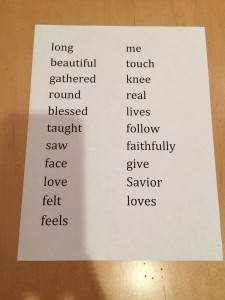 I print out 12 copies of the words (twelve because I want to divide into groups of three or four in my Primary, and I have 45 or so children). I take each page and cut the words apart, then put them into an envelope. I label the envelope with the name of the song, and continue until all the pages are cut apart and put into envelopes. 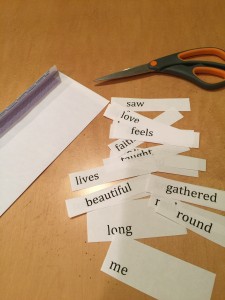 I ask the children to find two or three friends and get into groups of three or four.

I call out “Freeze!” and give them the rules of the “game.”  1. I will sing the song 6 times.  2. Put the words in the envelope in order before I sing the song through 6 times..  3.  Not all of the words are in the envelope – only some of the major words.  “Ready? Go!”  I begin to sing the song.  Groups of children around the room are clustered around the words trying to get them in order as I sing the song. I finish the song and begin to sing it again.  One of the older groups finishes putting their words in order triumphantly.  I ask them to join me in singing to help all the other groups. Another group finishes and I ask them also to sing.  We begin the song again. Yet a third group finishes and I ask them to sing.  With the three groups singing the song for the others, I remain silent, but walk around the room giving help to the last groups.

As an extender, when all the groups have finished, I ask the children to sing ONLY the words that are printed before them.  We sing the song, singing all the rest of the words in our head (a very strong way to learn both the melody and the words). If there is time, we switch and sing only the words that are NOT printed in front of us.

To finish, I ask that the children put the words carefully back in the envelope.  Someone helps me collect the envelope while I move immediately on to another activity.

Success.  It was challenging for the children, it peaked their logic and word intelligences, as well as their music and people interaction intelligences. The children heard the whole song at least 6 times, yet they were focused on parts of the song. They were engaged and participating in a hands on way.