I stand in front of the children.  On the chalkboard (or whiteboard) is a list of words grouped into threes.  I hold the eraser in my hand. 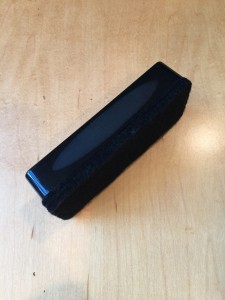 See if you can get all the words that are NOT in the song erased before I sing the song three times.”

I walk over to a child and hand him the eraser.  I begin to sing.  The child goes to the board and tries to figure out which word he can erase that is not in the song, he erases the word,  then he hands the eraser to someone else.  I am singing and encouraging the children with my actions.

There is intense concentration on the children’s part.  As I come to the end of the song, I say, “That was the first time through the song.  Only two left.”  I start singing the song again.  The children are handing the eraser to their friends and then erasing words.  I stand with chalk (or markers) to rewrite a word mistakenly erased that IS in the song, and nonchalantly write it up as I’m still singing (not calling attention to that child).

It is very hard for the children not to talk (grin).  You will hear comments like, “Not that one!” Or, “One down, one down.”  The children will wave their hand and say, “Pick me!”  I am walking through the children smiling, putting my finger to my lip to show them to be quiet (but letting my eyes sparkle so that they know that is part of the fun of the game).  I am constantly singing.

Here is a picture of the eraser pass game I did today for the song “I Wonder When He Comes Again.” 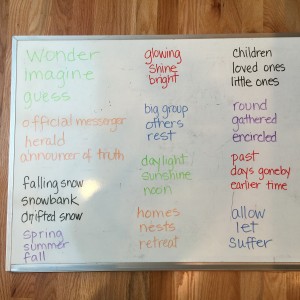 How to set it up

How do I choose the words? Why are they in groups of three?  Where do you get the words that are not in the song?

1.  I choose about 12 words from the song, one from each phrase or so.  I choose words that might be hard to understand or capture a main idea.

3.  After I have the 12 words, I choose two companion words for each of the words of the song.  These words can either be synonyms or opposites of the song word.  (It helps the children unknowingly to understand the meaning of the word better.) I use dictionary.com to help me out, or a thesaurus.

4.  I list the set of three words in the order they come in the song, although in that set of three, I list the word from the song first, sometimes second, and sometimes third (so that the children don’t really know where the song word is in the order on the board. Look at the above example of the words from I Wonder When He Comes Again.)

This is a great activity to help the children bring order to the words of the song in their own heads.  They have to compare and contrast which words are really in the song.  They see words that are similar, but not the same.  This challenge is well suited for the 8 to 11 year old because of the challenges it poses for them.  They often enjoy word searches and puzzles.  This is both, with music thrown on top!

An extender activity to the eraser pass game:

After we have erased all the words that are not in the songs, we look at the 12 or so words that ARE in the song which are left on the board.  I challenge the children to only sing the words on the board.  (Notice this is the first time I have asked the children to sing.  They have heard the whole song at least three times through as I have sung it to them, but their minds have been engaged in the challenge of erasing. Because of that, the words slip into the back door of the mind and coordinate with the melody magically.)

Now switch, and sing only the words that are NOT on the board.  It is a fun mind puzzle and challenge for the children!  They like this activity!