The brand new Sunbeams came in from the nursery. They are darling, wiggly, bright eyed, and some are a little intimidated by the larger Primary. The seven year olds are sitting in the back of the room, and some of them are going to turn eight very soon.  What different ages and needs!  What movement can I do to a sacred song that engages both of them?

That’s the question I consider as I search for a movement that mirrors the pleading faith and the expression of love and wonder that is in the song “I Know That My Savior Loves Me.”

“Can your hands follow mine?” I ask and start to move my hands up, down, and to the sides slowly.  Sometimes I will split my hands and have one go up and one go down.  The seven year olds immediately follow.  (The three year olds often will just watch puzzled.  It makes me smile.) I lead all the children into a pose with both hands off to my right side horizontally.

I pull both hands across to the left side. 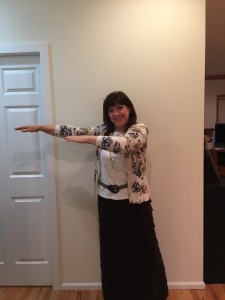 Now I make a big circle up and over my head. 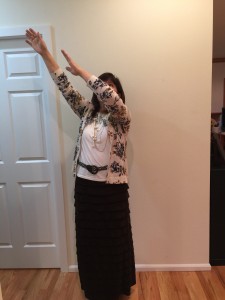 I continue that swaying motion to the beat with the added circle motion and begin to sing the song. After only two sets of that pattern, I call out “Freeze!” and I freeze my hands and motion.  I ask the children, “Are your hands exactly like mine? Is your foot exactly pointed like mine?”  The children adjust their body shapes.  (Often their hands are pointed exactly opposite of where they should be.) I begin moving and singing right where we left off on the very next phrase. Again moving through two sets of the pattern, I call out “Freeze!” and have the children check where their body is in space (a huge skill for children to learn.)

At this point, the seven year olds are not challenged anymore, so I change the pattern.  I sway back and forth several times without the circling motion, then I stick in a big circle at the end.  In a playful way I say “Gotcha!” and smile at the seven year olds, who, because of the switch in the pattern, are back engaged and trying to follow.

When we get to the chorus, I change the pattern yet again. 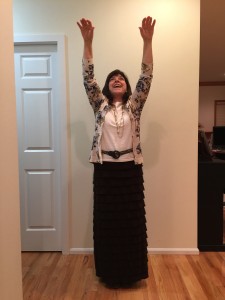 I lift my hands high above my head and down again two times on the words “I know He lives!” (The children through this movement unconsciously sense the climax and most meaningful part of the song.) I then go back to the swaying motion until the words, “My heart I give to Him.”  At that words, I lift my hands above my head once again two times, then continue swaying to the end of the song.

The momentum of the song, the rhythm, and the dynamics are learned well as they move, even better than singing it alone! The plus is that they also have the words slip in the Back Door.