“Luke flies his small spaceship toward the giant Death star.  ‘Stay on target! Stay on target!’  There is a small window of time to get the missile into the right spot.  The tension mounts.” Of course you might recognize that scene from the movie “Star Wars.”  I bring that example up to talk about windows of opportunity. 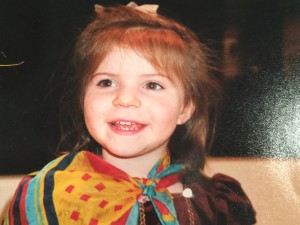 As a child grows there are certain windows of opportunity that open up to make it the right time for learning certain things. Nursery age has a lot of windows.

For instance, a child learns to sing in tune as he or she uses their voice to mimic high and lows. The open window for that is from birth to three years old! That makes nursery a perfect place to help a child learn how to sing on pitch. (You can learn to sing in pitch after that, but at those ages it is easier because of the open window malleability of the brain.)

A child learns how to keep a steady beat as he or she practices it with their body.  Tapping and thumping to a beat in nursery is a great support to a child who is learning steady beat (a huge skill that affects cutting with scissors, reading well, playing sports at a high level, and so much more). This window is from birth to nine years old.  That is not saying that you can’t learn steady beat after that, but it becomes much harder. 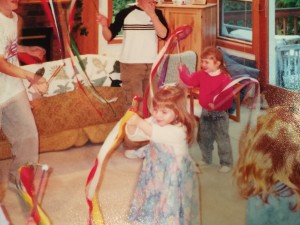 A child gains control over his or her ability to start and stop and action (and thus stop and start an impulse) by practicing starting and stopping.  When he or she wiggles a ribbon wand and stops as the teacher says “Freeze,” it is a practice of stopping.  When a child begins to sing when the teacher starts, it is practicing starting.  Start and Stop is one of the major skills the nursery age child is learning.  It will help him with his or impulse control AND executive function in the future. Moving to a rhythmic beat is one of the great helps for forming the frontal lobe of the brain where that impulse control is located.
What is the difference between fast and slow? That whole world of discovery is opening up to the nursery age child! Because their small hearts beat at about 120 beats per minute, their movements are naturally faster than ours as adults.  Their hearts usually beat twice as fast.  That being said, it is hard for a nursery age child to move slowly.  It has to be taught in small, measured bursts of practice. (Moving their hands and arms slowly across their body will not only help them learn the control of slow movement, but will someday help them read the sentence and the phrase all the way through to the end! It will eventually help them use the concentration they need to read slowly rather than only skim.)
There are so many windows of opportunity for the nursery age child, many which Nursery Singing Time can deeply affect!
So what do I do in Nursery music to take advantage of those windows?  That will be the focus of my next post.