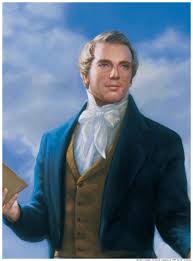 (Tell the children you have a story.  Proceed with a story like the one below.)

Ryan’s dad raised his eyebrows and looked at his son.  “Why do you ask?”

“Well, I just want to know if he really died.”  Ryan seemed puzzled, but sincere.

Coughing to get a little more time, Ryan’s dad cocked his head.  “Ryan, I need a little more background. Tell me what you were thinking before you talked to me.”

Ryan scuffed the ground with his shoe.  “I dunno.  But in Primary we are singing…

(Sing “Great is his glory and endless his priesthood.”)

“That pretty much sounds like he isn’t dead.  Maybe he’s still alive!”

“Listen to the next part,” Ryan continued enthusiastically.

(Sing “Ever and Ever the keys he will hold“)

“See?”  Ryan looked up at his dad expectantly.

“Oh!  I understand now,” Ryan’s dad nodded knowingly.  “I get where you are coming from.  So are you thinking he is still on the earth somewhere?”

Ryan nodded.  They walked along the path, and Ryan picked up a stick.  He threw it as hard as he could, and it landed an impressive distance away. Then he answered, “Yea, maybe he is.”

(Sing “Faithful and true, he will enter his kingdom“)

“Joseph Smith is definitely still alive,” Ryan’s dad pursed his mouth together, “but I don’t think he is on the earth.  I’m pretty sure he is up with other great prophets like Moses, and Abraham, and Isaiah, maybe even Nephi, too!”

(Sing “Crowned in the midst of the prophets of old“)

Ryan’s dad started singing the song from the start as they walked.  Ryan grabbed another stick and pretend to be the conductor walking backwards while his dad sang.

(Sing the verse and use a stick to direct.  You could even walk backwards a bit to augment the story.

Ever and ever the keys he will hold.

Faithful and true he will enter his kingdom

Crowned in the midst of the prophets of old.”)

After you sing the song, show a picture of Joseph Smith and bear a short testimony about his role in the restoration.  Move immediately on to another song and activity, preferably one with movement.