Be True, be true. 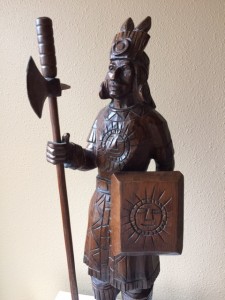 The battle was fierce.  So many men were injured on both sides.  In fact the leader of one army was killed, and the other leader, Moroni, was injured.  Things were going badly.  That is when 2,000 young men joined the fighting.  They had never even fought before!  But these were were young men who were “true at all times in whatsoever thing they were entrusted.”  They were amazing young men.” (Alma 53:20)

Immediately I ask the children, “Can your hands follow my hands?”

I stand in front of the children and begin this pattern to the beat.

The children begin to follow me as I continue to do the pattern.  I start singing,

“Our prophet has some words for you…”

On the words, “Be true, be true,” I punch first one arm out in front of me, then the other arm.

On the words, “Stand for the right,” I hit both palms of my hands on my thighs (patsch) 4 times.

“Thank you!  How many of you think you could do the pattern with your eyes closed? Let’s try!”  We sing and do the pattern.  I watch carefully as the children move with their eyes closed to see who is moving to the beat, and who might need a little more help.

The children love being involved, moving their bodies, and being the leaders.  This pattern helps children learn to move to the beat, which helps their frontal lobe develop!  And it’s fun!